Seville is not åonly characterized by flamenco culture and good tapas, but also by the large number of hidden legends that have occurred throughout its history. In our Seville Hidden tour you will discover all the mysteries that the city hides and we guarantee that it will not leave you indifferent; We will show you the other side of the Spanish capital, what the Sevillians do not want to tell us.

On this tour we will visit a new part of Seville, specifically we will travel all the north of the Andalusian capital discovering new corners of the city. We will start in the Plaza Virgen de los Reyes where we will know its tradition and union with Fernando III, better known as the Santo, we will enter one of the most beautiful squares in Seville, such as the Plaza de la Alianza to later arrive at the Alfalfa neighborhood where we will meet one of the most important legends related to Don Pedro I, renamed Don Pedro I el Cruel We will walk along the well-known Sierpes street discovering its origin and letting us fall in love with its old shops, cafes and traditional shops.
In our tour of legends of Seville we not only want to teach you traditions, but also the true beginnings of literary works as recognized worldwide as Don Juan Tenorio or Sevillian authors such as Gustavo Adolfo Bécquer. We will travel in time to immerse ourselves in the world of the kingdoms of Castile and discover some of the most famous stories such as, for example, the legend of the shoemaker become king or how the Lord of the Great Power went to visit a man who did not He wanted to go see him at his temple. Real stories and not so old, that have become well known to any Sevillian.

After this tour you will know the answers to questions like Why the Virgin of the Kings was so important for Fernando III El Santo ?, Who is really the patron saint of Seville? What do we know about Carabolo’s treasure? Where is the Head of King Don Pedro Street? To whom did some of his poems the famous poet Gustavo Adolfo Bécquer? Thousands of questions with thousands of answers that will be answered on this tour of approximately 2 hours.

This tour starts from the Plaza Virgen de los Reyes, next to the Giralda. It’s easy to see us! Look for our WHITE UMBRELLA right next to the fountain (on the corner of Mateos Gago). We will be in front of the restaurant” El Giraldillo. 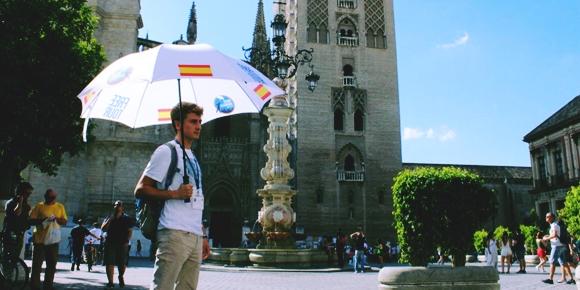 12€
If you visit the capital of Andalusia without visiting Triana, then you haven’t fully seen the city. But Triana is not just a neighborhood, it is a way of life, a way of being, a philosophy of its … Learn more