The south of Spain is full of amazing portals to the past and one of the most spectacular is found in the capital of Andalusia: Seville. The city is a fascinating mix of Mudejar, Gothic, Baroque and modern architecture; Examples of each style can be found in each corner, within each square. Without a doubt, this city offers countless hours of exciting exploration, after all, it can boast of having hundreds of years of history.

If we want to get lost due to its beautiful streets, it is good to know that White Umbrella has a free tour (link to the tour), in which they will explain the historic center in detail.

HOW TO GET TO SEVILLE

Seville is easily accessible by car, train or plane. It has good infrastructure very close to the center, such as the railway station, or something further away, such as the Seville-San Pablo airport. If we have approached by train, at the Santa Justa station we have taxi and bus service, number 32 is the one that leaves us right in the center. However, if we have landed, we must know that we are 10 kilometers from the city, so the only two options are the bus and the taxi. It shouldn’t take more than 35 minutes by bus and 20 minutes by taxi.

A GOOD TOUR OF SEVILLE

The Seville capital attracts thousands of tourists from all parts of Spain and the rest of the planet. Its beauty is legendary, where we can highlight its monuments, but also gastronomy and culture. After all, Seville’s identity has two very special dates: the April Fair and Easter. In any case, if we have come to Seville for the first time, it is important to highlight that at any time of the year it is an interesting option to have a free tour (link to the site) like the White Umbrella tour.

If we have been encouraged to choose the free tour, we can admire and soak up the history of monuments such as the cathedral, originally the Grand Mosque and it is the largest Gothic church in Christendom.

On a pleasant afternoon or warm night, the Plaza de España in the Parque de María Luisa is a wonderful place to shop and relax, or enjoy a boat ride. By continuing to explore the city with the free tour, we will jump into the past with a visit to the alcazars. Listed as a UNESCO World Heritage Site, the Royal Alcazar was originally the medieval Arab fortress. The palace was built in the 10th century, after the Christian Reconquest in the 1360s, Arab architects created the Mudejar-style buildings for King Pedro el Cruel.

In the distance we will see one of the city’s icons appear: the Torre del Oro. This monument is a legacy of the Almohads, an Arab dynasty that controlled much of southern Spain until the reconquest of the area by Christians in the 13th century. It is currently the city’s naval museum, closely connected to the time of the Spanish Empire in the New World. Not far away and already finishing, we find the Isabel II bridge. Doesn’t it tell you anything? normal, since this bridge is known as the Triana bridge, because it connects the historic center with the famous Seville neighborhood.

This city has a huge culinary offer, since it not only includes typical Spanish dishes, but we can also enjoy typical Sevillian and Andalusian dishes. Gazpacho, flamenquines, fried fish are some of the delicacies with which we can delight ourselves with a cold beer.

On the other hand, people from Seville love to be on the street when the weather is good, we go almost all year round. In fact, the Sevillian identity explodes as we already mentioned during Easter, with its processions and during the April Fair. If we are lucky enough to be in Seville during these dates, we will attend a festival of color, dance and feelings. If not, we can always visit a museum such as the naval museum or the Museum of Fine Arts, where we will find works by El Greco, Pacheco, Velázquez, or Alonso Cano, highlighting the works of Murillo.

If we have several days to visit Seville, we can highlight several day trips to make. For nature lovers, the Doñana Park is located about 37 km and is one of the most important natural sites in Spain. On the other hand, Córdoba is a stone’s throw away and is a highly recommended city. Finally, if what we want is to take a dip, Huelva and Cádiz can be two good options to enjoy the sea and the beach. For all the options exposed, having a private vehicle is more than recommended, since despite the fact that there is transportation, the schedules can limit our adventure.

From Monday to Saturday at 3:15 p.m.
On Sundays this visit takes place at 1:30 p.m.
Avaialble languages:

12€
Every Monday, Wednesday, Friday and Sunday at 11:00 AM.
Avaialble languages: 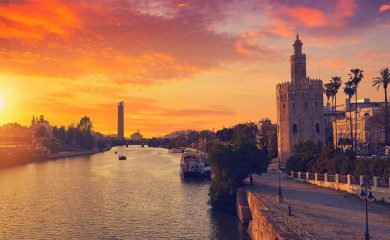