With approximately 1.5 million inhabitants, Munich is the third largest city in Germany and the twelfth largest in the European Union. The Bavarian capital has a huge cultural offer with more than 40 theaters and museums, apart from dreamy locations and monuments. Munich is an atypical German city, so we should not expect the same as we have seen in other cities in the country. Despite the fact that the historic center was restored after the war in its original form, this city has re-emerged modern and cosmopolitan.

If we come for a few days, we can suggest places to visit and activities to do, but if it is our first time, our best recommendation is to choose the free tour of White Umbrella, in which they will tell us and teach us what it takes to feel like a muniqués plus.

FROM MUNICH AIRPORT TO THE HISTORIC CENTER

If we have looked at the map of the city upon landing, do not panic. Although there are about 30 km to the center, access is really easy. Munich-Franz Josef Strauss International Airport has an exceptional transport network with metro, buses and taxis at our disposal.

If we choose the train, there are two lines that leave us in two different parts of the city, but very central. The price is around € 12 and it takes around 40 minutes. The bus (Lufthansa Airport Bus), as usually happens in other European capitals, is the cheapest system to reach our destination, but also the one that takes the longest. The price? About € 10 for a 50-minute journey. Lastly, the simplest but also the most expensive option, around € 60, is the taxi, which usually takes between 45 minutes and an hour, depending on traffic.

If we visit Munich for the first time, the easiest and most practical way to get to know the city first hand is to inform us of what free tour there is in the city. The guys from White Umbrella offer a free tour (link to the tour) that will delight beginner Munich tourists, as it will allow us to see first-hand the best of Bavarian folklore and architecture.

The city center since the 12th century is found in the famous Marientplatz square. Here we find the New Town Hall, which turns out to be not a normal building, as shown by the spectacular clock from the beginning of the 20th century, the Rathaus-Glockenspiel. This mechanical watch has 43 bells and 32 life-size figures offering a 15-minute show with scenes from Munich’s history at 11 AM and 12 PM every day (plus an extra show at 5 PM between March and October ).

For an alternative view of Marienplatz, head to the top of St. Peter’s Church to enjoy a panorama of the square and the other side of the city. St. Peter’s Church is the oldest church in Munich and is on a hill, so you can’t miss it. It was rebuilt after being badly damaged in World War II. There are 299 steps to climb to get to the top, but the views are worth it. On a day with good visibility, you can see up to the Alps.

Another of the destinations preferred by tourists is the Munich Residenz, home to Bavarian royalty and the seat of government from 1508 to 1918. We can admire it from the outside with the free tour, and it will seem like a fairly simple building, but inside it is all opulence with gold, frescoes, statues and marble everywhere.

Home to the famous Oktoberfest festival, this city has a huge beer tradition. Here we will enjoy one of the best beers in the world, which the people of Munich usually accompany with typical dishes such as Obatzda, a mixture of cheeses and pretzels (a bun in the shape of a bow), Schnitzel or breaded steak, potato salad or the wonderful sausage white with sweet mustard.

After finishing the free tour and having regained strength, we will have already realized that Munich is a great city for art lovers with its own museum district. Here we will find Pinakothek: the Alte Pinakothek, the Neue Pinakothek for European art of the 18th and 19th centuries and the Pinakothek der Moderne for contemporary art.

If we have enough days to enjoy the capital of Bavaria, we can make an excursion to the outskirts, whether it be to a city like Nuremberg or some natural place like the spectacular Konigssee lake. About two hours by car, we will also find the famous fairytale castle: Neuschwanstein. Located in an exceptional place and ordered to be built by Louis II of Bavaria in the late 19th century, it fulfills all the romantic dreams of a castle: high towers, battlements and stone walls that rise spectacularly on a rocky crag above the lake. It’s just as fantastic inside, lavishly decorated with themes of opera and romantic literature.

Monday, Wednesday and Sunday at 16:00

Thursday, Friday and Saturday at 5:30 PM 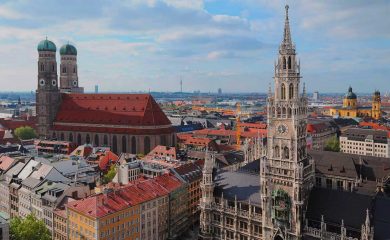