The imperial triangle is made up of Prague, Vienna and Budapest. The latter, apart from being the capital of Hungary, is one of the most famous Central European cities. Its river, the Danube, cuts the city in two with its colossal size, leaving one side and the other, nothing more than beauty in the form of avenues, imperial buildings and beautiful bridges that help connect the two banks.

Budapest is a city with a great history, which over the centuries has gone from being a town to an entire imperial capital. This results in a city full of monuments, palaces to an architecture and a culture of the most splendid.

If it is the first visit to this city, it is advisable to look for a free tour to find out the most important thing, as soon as you arrive and without paying a dime.

HOW TO GET FROM THE BUDAPEST AIRPORT TO THE CENTER

Budapest Ferenc Liszt International Airport provides tourists with two options for traveling to the city center: bus and taxi. Without a doubt, the latter is the cheapest alternative.

When leaving the enclosure, we will find the dock where we can buy the tickets. The price for a single is only € 3 (900 HUF), yes, the journey takes almost an hour.

The second option is the most practical but also the most expensive. A journey from the airport to the center costs approximately € 26 (8045 HUF), but yes, it will only take 35 minutes to reach our destination.

Once installed it is time to start getting to know the recesses of this great city. If we do not speak Hungarian we will have no more trouble moving, if we do it with White Umbrella and her free tour (link to the site). In this free tour, we will take a walk with some guides who live in this city and know each other, not only the corners, but the history of Budapest. Walking with them through the center, we will be shown one of the monuments that attract the most tourists to the Hungarian capital: the Parliament. It is located in district V, rising imposing on a bank of the Danube river, reason why its neo-gothic style is appreciable from many points of the city. The view is definitely beautiful, but it also makes up for getting closer, as some areas are accessible.

If we continue with the free tour, not far away we will find the old palace of the Hungarian kings: the castle of Buda. This complex is a colossal castle from which we will have very good views of the city. Standing since the 14th century, the different restructuring and expansions that have been carried out stand out, both in design and size. Admission is free and we can access a large number of its corners. To get there, we can walk or use a funicular that costs about € 4.

If we have been around the city for a long time, we will have already had a look at the imposing Chain Bridge located just in front of the Buda Palace. This bridge, inaugurated in 1849, owes its name to the heavy chains that support it, a symbol for the city. It is the main bridge of Budapest and a tourist attraction, although vehicles and pedestrians unfortunately share it.

After touring the city with the free tour, it’s time to recharge your batteries with a good lunch. In Budapest they are good food, a lot of spoon dishes against the cold, game meat and desserts with Turkish influences. After all, Hungary has had a history full of clashes between both countries, so the Ottoman empire left its mark not only on the country, but also on the plates.

The most typical is undoubtedly goulash, a spiced meat broth that is so famous that other countries such as the Czech Republic have created their own version. Another of the star dishes is found in paprika chicken, a delight with spices that we can enjoy in any restaurant.

Once the energy is restored, we can always take a walk and do some shopping in the different shopping centers of this city.

As in many cities in Spain, the Hungarian capital has a regional commuter train service. With them we can travel to the outskirts of the city to enjoy towns like Szentendre, which is 10 km away or Gödöllő, which has a spectacular Habsburg Baroque residence fully accessible. Of course, if we have a lot of time and we like the water, we can travel to one of the areas that the Hungarians love the most: Lake Balaton. Here we can not only relax taking a good bath, but also do water sports. To get there, we need time, since it is about 100 kilometers from the capital. Of course, we can spend the day and the night, since we find numerous hotels to sleep.

The imperial triangle is made up of Prague, Vienna and Budapest. The latter, apart from being the capital of Hungary, is one of the most famous Central European cities. Its river, the Danube, cuts …

The imperial triangle is made up of Prague, Vienna and Budapest. The latter, apart from being the capital of Hungary, is one of the most famous Central European cities. Its river, the Danube, cuts … 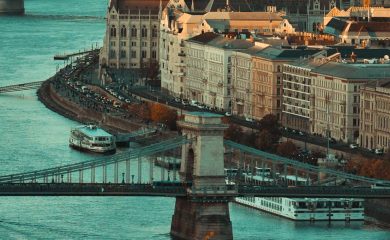