The capital of the Czech Republic is located in central Europe and is one of the most spectacular urban gems on the entire continent. Founded in the 10th century, this city has been shaped throughout history by dozens of different cultures and sovereignties.

After a tragic 20th century, the Czech Republic has opened up to the world after the fall of communism, and is now considered one of the most famous destinations in Europe, with more than 6 million visits a year by tourists from all over the world. balloon. For this reason, and although it is not a very large city, it is important to know in advance all the possibilities that this beautiful city offers, so we hope that this article will serve you to enjoy Prague.

FROM THE AIRPORT TO THE CENTER

Prague has a fairly decent international airport with three terminals. If we come from Spain, it will take us two to three hours to land and about 20 minutes to collect our bags. There are several options for traveling to the city center: bus and taxi. The cheapest combination is the bus and metro, since for just over a euro and a half, and in just 30 or 40 minutes we will reach the center. The taxi on the other hand, offers us the fastest route, in exchange for increasing the price. A journey to the center takes about 20 minutes and we shouldn’t pay more than 20 euros. Of course, it is more than recommended to use Uber or one of the duly signposted local companies, since, as in many other European cities, there are pirate taxi drivers who will increase the price dramatically.

DO YOU DO A TOUR OF PRAGUE?

Once installed, it is time to enjoy the beauty of this fairytale city. Prague can be seen in its great extension in about three or four days, since not only the center has many places of interest and monuments that we cannot miss. If it is the first time that you visit the Czech capital, a very good recommendation is to contact the local guides who tell us what to see or where to go. We recommend without any doubt, the free tour of White Umbrella (link to the site), where in a few hours most of the center will show us, and absolutely free.

The city of Prague is itself a monument that has different palaces, museums and dream locations. Its classic buildings, the beauty of the Vltava river that splits the city in two halves are some of the examples of the wonderful atmosphere that we are going to find here.

In the part known as the New Town is where we will start the free tour and home to one of the most famous clocks in the world: the Prague Astronomical Clock. It is not the only one in Europe, but it is certainly the oldest: more than 500 years in operation.

Other of the jewels of the city can be found in the famous Charles Bridge. If we are doing the White Umbrella Free tour (link to the site), this will be one of the places we will get to after the clock. Pride of the Czechs, Karlův most is a work of medieval engineering, which has served citizens to cross the two banks for more than 600 years. From here the view of the city is beautiful, and although it is usually quite crowded, you will see it on a free tour, there is always a place to stop and relax.

Finally, we cannot stop talking about the famous Prague Castle, the largest in the world, thanks to the complex that encloses its palaces and the Cathedral of Saint Vitus, which stands proud before the rest of the city.

There are many activities that we can do to disconnect from so much tourism. The beer culture in Prague is huge, and many of its inhabitants enjoy bars, where famous brands are served and others less, which will surprise us with their taste. They also have their own recipes such as meat goulash or the famous fried cheese, which we can enjoy in almost all Czech restaurants.

Once the energy is answered, we can always visit a theater (some plays have English subtitles), or spend a few hours in the City Museum, which has been recently renovated.

The transport network in Prague has three metro lines, dozens of trams and a number of buses that run through and around the city at all hours. There are some must-see places that unfortunately do not cover the free tour, such as the Vysherad Fort or the Terezín concentration camp, which is recommended to get there using public transport due to its distance from the center.

The Vysherad Fort is one of the least known places for tourists. Located on a hill on the banks of the Vltava river, this ancient fortress offers a wonderful view of the entire city, in addition to several interesting buildings to visit, including church and cemetery.

Bridge of the Legions 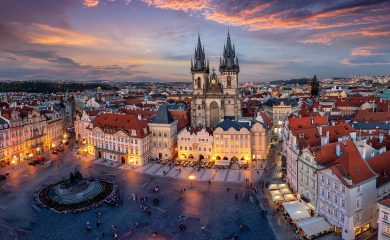